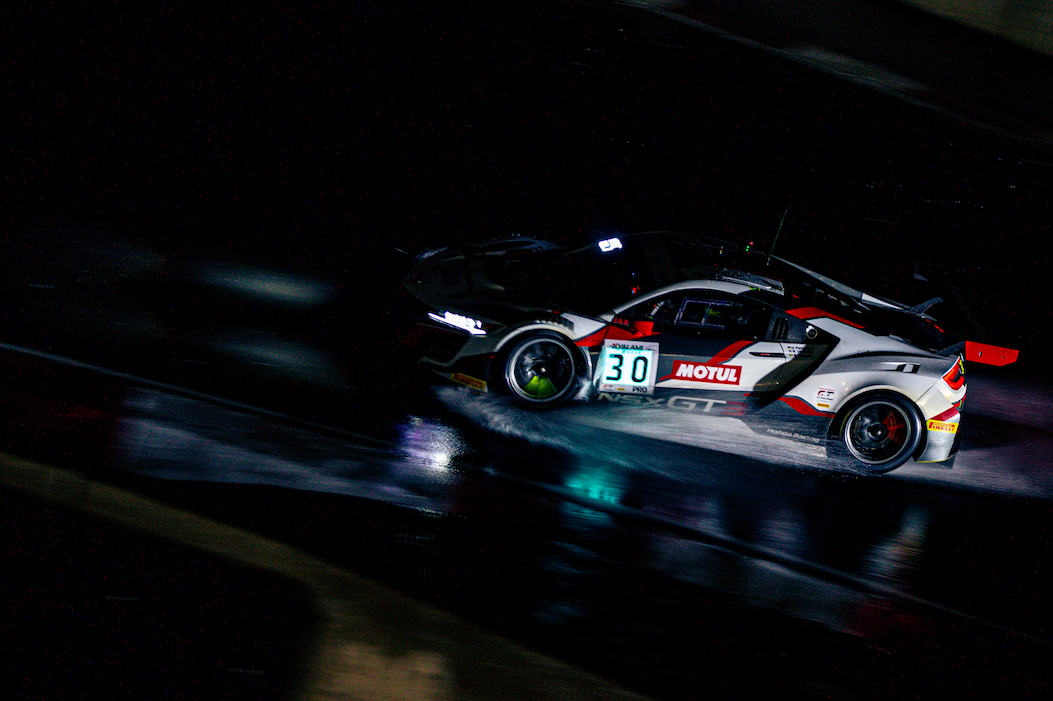 Renger van der Zande, Mario Farnbacher and Bertrand Baguette dominated the weekend as they put the Honda NSX GT3 Evo on pole position and led the entire first eight hours, only for wet conditions in the last hour to drop them to fourth place at the chequered flag.

The JAS Motorsport-run team were the class of the field all weekend; Mario setting the pace in pre-qualifying and he, Renger and Bertrand combining to top Friday’s qualifying session and secure safe progression to the six-car pole-position shoot-out.

With all the pressure on the double IMSA GTD champion’s shoulders, Mario stepped up to the plate and set a blistering pace to break the Kyalami GT3 qualifying lap record and score the team’s first IGTC pole since last year’s California 8 Hour.

Bertrand, who was making his first IGTC appearance of the season, took the start and resisted challenges to his leading position, despite his car having been hit with a boost reduction after qualifying under the series’ Balance of Performance system.

He, Renger and Mario continued to hold the advantage all the way to the eight-hour mark, some stunningly consistent laptimes keeping the gap at between three and 13 seconds and perfect pitstops helping the trio all the way and putting Renger and Mario on course to win the IGTC Drivers’ title with their key rivals further down the field.

The race turned with an hour to go though after torrential rain and lightning hit the circuit and brought out a full-course yellow.

Bertrand was brought into the pits to hand over driving duties to Mario and to have a full fuel load put into the NSX GT3 Evo that would allow it to run to the end, regardless of when green-flag racing resumed.

After rejoining, he was held up by a rival car driving 10 seconds per lap slower than those ahead, creating enough of a gap for Mario’s rivals to come out ahead of him after they pitted in the 15 minutes that followed.

A frustrated Mario ran fourth all the way to the finish as the whole of the final hour ran under a combination of Full-Course Yellow and Safety Car conditions; a poor reward for a magnificent team performance.

The results mean Renger and Mario - the only members of the team to contest the full IGTC season - finished fifth in the Drivers’ Championship, having been on course for the title just an hour earlier. Honda took fifth in the Manufacturers’ standings.

Alessandro Mariani, Team Principal, said: “The frustration of losing this race is huge, but this is sport and this is why people love it. Every member of Team Honda Racing should be incredibly proud of what we’ve achieved this weekend. We dominated; we absolutely dominated, and we showed the world the strength of the NSX GT3 Evo, built by JAS. I don’t think I’ve ever seen one car lead every lap of a GT3 race for eight hours before, and that’s what we did today. Nobody could have forecast what happened in the last hour with the weather. We had a strategy that meant we could run flat-out for the final hour in wet or dry conditions. Unfortunately the caution period meant we never got the chance to show this.”