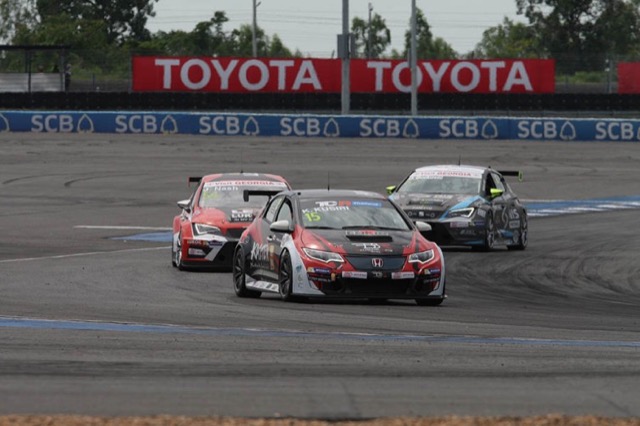 In the TCR International Series, Gianni Morbidelli took his JAS-prepared Civic to its fifth podium of the season in the first of two races at Buriram, Thailand. The Italian scored valuable points despite overheating issues, to keep his championship aspirations alive.

In race two, Mikhail Grachev started from pole position and drove a strong race, despite having to deal with damage caused by another competitor in the first race of the weekend. His second place was enough to give him valuable points in his championship chase.

Unfortunately for Morbidelli, a rare error saw his WestCoast Racing Civic withdrawn, putting an end to a valiant climb from ninth place on the grid to fourth position at the time.

The next round of the TCR International Series takes place at the Marina Bay Street Circuit, supporting the Formula 1 World Championship on September 17th and 18th, with the first race run under the floodlights at night.

In the Chinese Touring Car Series, championship leader Martin Xie made the most of the reversed grid in his JAS-prepared Civic, to take victory in the first race of the weekend and extend his championship lead. Xie finished 1.6 seconds ahead of team-mate Henry Ho.

In the second race at the Guangdong International Circuit Martin went on to finish fourth, passing Ho at the end of the race and maintaining his championship lead.

In the TCR Thailand Series, Kanthadee Kusiri dominated the two races taking place within the TCR International event in his JAS-prepared, Team Eakie BBR Kaiten Honda Civic. He finished first and second in this category and clearly showed his level of performance against the international stars.