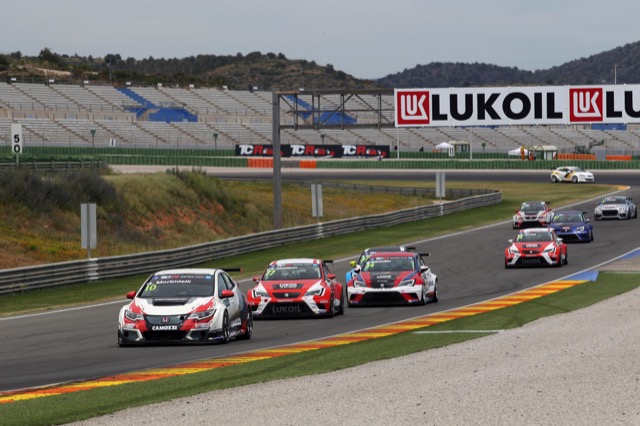 Subdued Race One, as Progress Slowed by Success Ballast for the Team Leader

There was disappointment for the JAS Honda Civic TCR team at Valencia on Sunday, as an early lap incident hampered pole sitter Gianni Morbidelli's progress. The team had been hoping for a strong finish after a less than memorable first race. Italian Morbidelli found the additional ballast imposed as a "success" penalty was too much to enable him to keep up with the local SEAT team drivers, competing on their home track.

As expected, this was not an opportunity for a good points score, due to the imposed ballast restrictions. Morbidelli was the highest placed team finisher in eighth place, with Kevin Gleason a subdued 11th.

Much more was expected during the second, 15 lap race however. In a fight for position into the first corner of the race, a three-car collision involving Morbidelli prompted the deployment of the safety car. Even though the race was then under caution for three laps Morbidelli was forced to re-start from the rear of the pack, as he had to make a pit stop for collision repairs.

Despite battling back through the field the leader of the West Coast Racing team could only manage fourth, with teammate Kevin Gleason following behind in fifth. The third JAS Honda Civic TCR driver, Ukrainian Igor Skuz retired after lap five.

The next round is at the Autódromo Internacional Algarve in Portimão on May 10th.