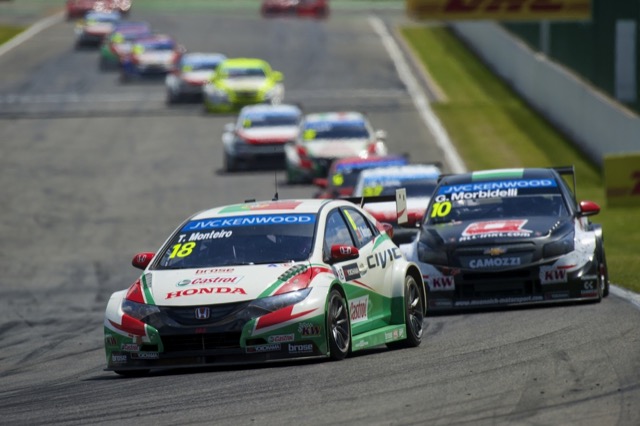 Ready for the Temporada Argentina!

After seven event-filled rounds in Europe and North Africa, the second half of the 2014 FIA WTCC begins this week and first up is Argentina.

It’s the second time an Argentinean round has featured in the WTCC and as before, it will be held on the Circuit Termas de Rio Hondo; a track 5 km from downtown Termas, in the province of Santiago del Estero, and a two-hour flight away from the capital Buenos Aires.

Whilst the 4.8 km technical track will offer no surprises for the FIA WTCC-drivers, since their first visit the infrastructure has been fully modernised, with a new pit building, medical centre, heliports and grandstands.

“In many ways the Termas de Rio Hondo reminds me of the Moscow Raceway’, says Tiago Monteiro, who’s currently standing in 4th in the Driver’s Championship. “With its long corners, I fell in love with the circuit the moment I first drove it and managed to perform well right away. How will the Civic WTCC perform this time round? Who can say? The only thing I know is that Gabriele and I have been thoroughly preparing for the second half of the season, so I am convinced that we’ll be in the running for the top spot.”

After the final European round in Belgium, the FIA WTCC enjoyed a long summer break - not that all members of Honda R&D and J.A.S. Motorsport went on holiday. After the race in Spa they prepared all the material for shipment in time for Argentina, and at the same time chassis number 6 was completed in their Italian base in Arluno near Milan.

“Before the start of the season we built five cars: two for the Castrol Honda World Touring Car Team; two for Zengo Motorsport and Proteam Racing, plus a chassis for the test team”, explains Alessandro Mariani, Managing Director of J.A.S. Motorsport.  “It’s well known that the chassis that was meant for the test team had to be prepared for the race in Paul Ricard, following Gabriele Tarquini’s crash in Marrakech. That completely changed our planning, because not only did we have five meetings that closely followed each other, we also could not rely on the information of a test team. Because of that busy schedule we could only start building the new car, chassis no. 6, in the second half of June, and the earliest opportunity to test it was last week on the Spanish track of Valencia.”

The four day testing programme took place in Valencia as it was in Spain’s third largest city that the TC1-configured Civic made its debut earlier in the year.

“Valencia is the track where we rolled out the current Civic”, Mariani continues. “And even though the car has improved since then and there are much higher temperatures in Valencia now than during that first test in March, it was a great opportunity to use the data of that very first test session. It provides us with the time to optimise our current situation, thoroughly test some new parts – such as different options in suspension – and to understand whether or not we can continue to evolve in the right direction. We’re obviously keeping our cards close to our chest, but I think we can say that we will tackle the upcoming races with plenty of confidence.”

“Engine-wise, since Spa we’ve had some updates and in Valencia we were able to try some different set-ups. So we’re very much looking forward to seeing them in action in the next race and performing well.”