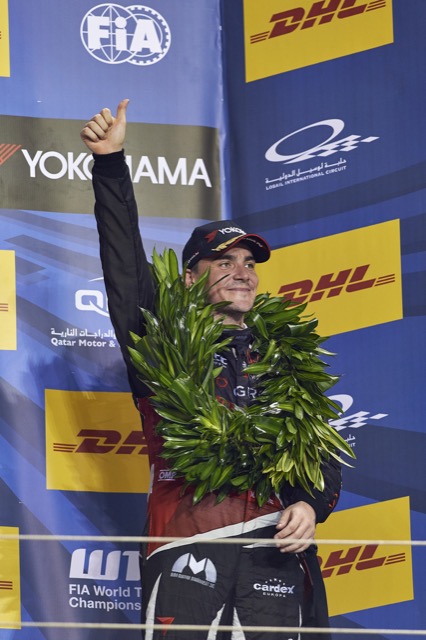 It’s been a banner year for JAS Motorsport. The Honda Civic has proved competitive in both race and rally and in touring car events and championships around the world.

Norbert Michelisz proved that he was more than capable of challenging within the prestigious World Touring Car Championship. The 31-year-old was competitive throughout the series in his JAS Motorsport prepared Civic and captured the key Yokohama-sponsored Independents Trophy, for the second time.

In so doing, his pace was sufficient to take the Zengo Motorsport driver to an outright win at the Hungaroring, one of the toughest venues in the entire championship.

Norbert's ultimate goal was always to finish as high as possible in the overall classification and in this season long WTCC series he finished sixth overall, in between the Castrol Honda drivers Gabriele Tarquini and Tiago Monteiro.

Further successes in the premier touring car championship were enjoyed by Monteiro, who secured strong wins for the JAS-built Honda Castrol WTCC team in both Russia and Japan.

One of the most successful campaigns was fought out by the West Coast Racing team using JAS machinery in the new TCR International Series for touring cars.

Right out of the box the Civics were both competitive and spectacular. In the steamy Sepang circuit in Malaysia lead driver Gianni Morbidelli was judged to be the most committed by industry experts, as he completed an inspired overtaking manoeuvre to score a podium place. His American teammate Kevin Gleason was not to be outdone and put the JAS Motorsport–prepared Honda on pole position immediately. Already, the team was ahead of the other three leading manufacturers!

And this was just the start. During the next round of the TCR series Morbidelli, Gleason and the third team driver Rene Munnich dominated qualifying in Shanghai, coming across the finish line in 1-2-3 formation. It would only get better, as the three team cars repeated this feat in the first race, Morbidelli leading every lap on the way to victory.

As the series moved back to Europe the successful JAS cars were to be loaded with “success ballast.” Despite having to carry 45 kg, Morbidelli nevertheless once again showed the car’s pace in practice, but as expected the ballast was to prove too much of a challenge for solid results in Spain.

For the next round of the championship drivers and teams moved west to Portugal, for a weekend of racing on the Algarve. Gleason scored a solid second-place finish in the second of the two races.

One of the best performances of the season was reserved for the Italian “Temple of Speed” at Monza. On home soil, Morbidelli was in a class of his own and scored a win in both of the tough events. His haul of points was sufficient to move the veteran driver into a strong first place in the inaugural series.

Not to be outdone, teammate Gleason was to have his first victory of the season with a lights-to-flag race one victory as the championship moved to Austria. Morbidelli was once again forced to battle with success ballast, but was nevertheless able to score a podium finish during the second race and increase his lead at the top of the championship.

After visits to Russia and Austria were uncharacteristically subdued, the protagonists now turned to Asia and a spectacular night race in Singapore. Both of the lead drivers were very close to qualifying in pole position and Gleason was to deliver a second win of the season in race one. Morbidelli had his own spectacular fight to take third place on the podium and remained in contention for the championship crown.

Thailand was next on the agenda and Morbidelli was the talk of the town, with dominant qualifying times in the newly revised Step 2 Civic TCR, which JAS had been working hard on during the summer. It’s unfortunate that a very uncharacteristic start line error spoiled any chances in the actual race itself and ultimately the championship. However, the team did have additional cause for celebration as Gleason was also well on the pace in the original version of the car, despite having to carry a lot of success ballast which he had accumulated from the previous round.

As a way of adding an exclamation point to the season the touring car veteran Rob Huff jumped into a guest JAS-prepared Honda Civic TCR for the first time at the last race of the season in Macau. He went on to dominate practice and qualifying before scoring a resounding win in the first race of the testing circuit.

Meanwhile, other customers were having their own banner years. Michael Choi turned in a string of consistently strong performances in the TCR Asia series and was confirmed as champion with two races of the series still to go. Highlights of the year for Michael were undoubtedly the two wins he scored in the Singapore round towards the end of the season.

In China, JAS-prepared Honda Civics were very competitive in the domestic Touring Car Championship. Henry Ho was narrowly pipped to the championship title in the Dongfeng Racing car during the final round in Beijing, but nevertheless teammate Martin Xie netted that race win.

The team’s performance was even more remarkable considering that they did not contest the entire race weekend in Korea, as had always been scheduled before the season started.

Team leader Ho was able to score a pair of wins through the season, including a dramatic victory at the races in Shanghai and Guangdong.

To prove that the JAS-prepared Civics work on all surfaces, Luis Maldonado (h) took his first ever national title by winning the Paraguayan Rally Championship. Maldonado was consistently at the front of the field throughout this super-tough championship, before a category win secured the title on the final and toughest round of the year.

For JAS Motorsport there is no rest, even as the motorsport fraternity enters the “closed” season. All existing supported teams are getting ready for what is sure to be another competitive season in 2016 and new drivers and teams are coming on board to sample the undoubted performance and potential success of the Civic in either race or rally.