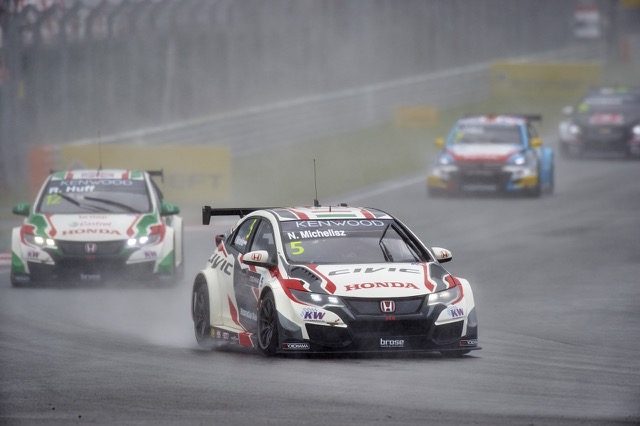 JAS-built Hondas were on the world stage podium for the 11th time this season, as the FIA World Touring Car Championship visited Moscow Raceway in Russia.

Norbert Michelisz rocketed off the line in the main race from fifth positon to finish third in his Civic WTCC; managing his tyres really well on a tricky track surface in so doing.

Right behind, his Castrol Honda World Touring Car Team-mates Rob Huff and Tiago Monteiro came in fourth and fifth places after only placing 11th and 10th on the grid.

Monteiro now lies fourth in the drivers’ championship with Michelisz seventh and Huff eighth; but only 15 points – which is only a third-place finish – away from second overall. Honda is in second place in the manufacturers’ championship

The TCR regional series were in action in Asia and Italy.

In Misano, Roberto Colciago scored an amzing victory in race one, despite starting at the back of the grid following some pre-race work on the car. He was to win the second race in Italy as well, but was penalised one place by the stewards post-race for a driving infingement.

In Asia, Henry Ho finished in third place in the main race in Buriram in his JAS-prepared Civic TCR.