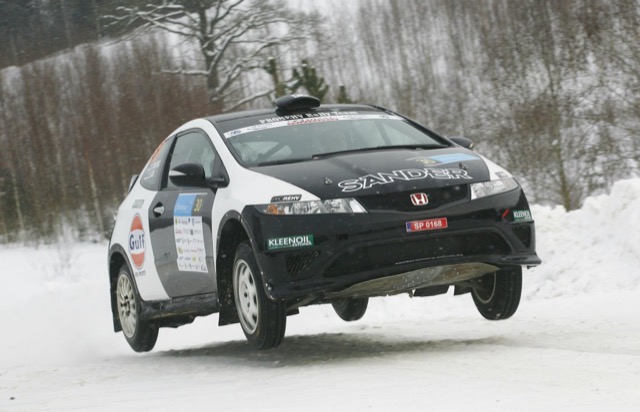 Sander Siniorg, stepping out of the shadow of Martin Kangur

Martin Kangur’s stunning performances in the International Rally Challenge – the precursor to the current FIA European Rally Championship – still linger in the memory for many rally fans. With his lightening pace, the Estonian driver in his red and white Catwees Honda Civic Type R was a constant threat to his fellow competitors in the 2WD Championship and a firm favourite with the crowds.

This year Hungarian Zoltan Bessenyey took over the Honda mantle from Kangur in the ERC, but in his native country his legacy lives on, inspiring another generation of young Estonian rally drivers to pick up the sport. This year no fewer than nine Honda’s Civics competed for the various titles on offer in the Estonian Championship, including 19-year-old Sander Siniorg, who tore up the record books in 2013 by winning five of them!

“The federations of Estonia and Latvia work together and have a shared calendar,” says Sander, who combines his studies at university with a very tight rally program. “This year I was really trying to get the most out of the season and participated in every discipline available in our local calendar to gain experience. The rally sprints are disputed over one day and because they exist out of three special stages, it was a rather cheap formula from which to learn.  Winning this 2WD championship ahead of Andrek Pollumaë in his powerful M3 was particularly sweet and I was also really pleased to win the 2000 cc category for Juniors, which I won by beating the Fiesta of Rasmus Uustulnd and the Citroën of Roland Poom.”

“I was very disappointed with the Estonian Rally Championship events where I had to retire three times whilst in the lead. But in the end I’m still more than happy with my 5 titles.”

Despite the disappointment, the Prorehv Rally Team’s Civic Type R driver, along with co-driver Annika Arnek, competed in a total of 21 rallies in 2013 and claimed 66 Special Stage victories and 12 1st places.

“A lot will depend on the budget we can secure and the plans of the Estonian federation,” determines Sander. “They want to promote the class of the R2 in 2014 and the winner will get the support for a full program in 2015. Since my debut in 2009 in the Honda Racing Youth Rally, every season has been managed with what I call a small “family budget”! My father is a retired sea captain and puts all his time and energy in to managing the team. That’s why I would love to go a level higher in 2014 and I’m hoping for some extra support.”