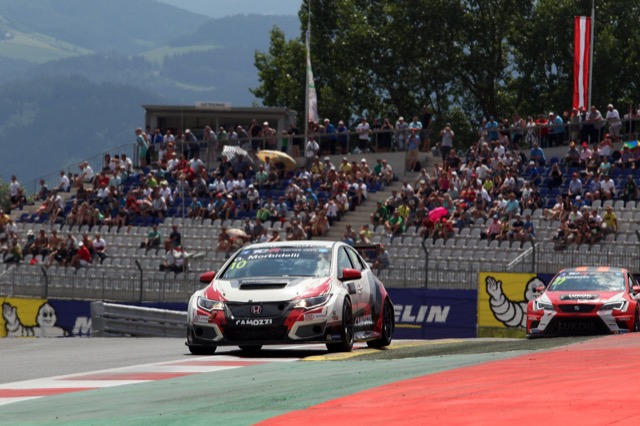 TCR: Controversy and Disappointment in Austria

Only five points for Morbidelli

What started off as a weekend with great promise ended in disappointment for the JAS Motorsport prepared West Coast Racing Honda Civic TCR team.

Early indications during practice showed that the revised Civics would be competitive and there was much elation when the team locked out the front row of the grid during qualifying.

Gianni Morbidelli took a hard fought win in race one at the Red Bull Ring in Austria, fending off his championship rivals and significantly closing the gap to the top of the standings in the TCR International Series. However, the stewards met following the race and decided that Gianni had “behaved unsportingly” during the race following several collisions, which Morbidelli in turn had described as racing incidents. The subsequent thirty second penalty demoted the Italian out of the points altogether. Kevin Gleason finished fifth.

Morbidelli and Gleason started in the middle of the pack for the second race of the weekend. After a poor start, Gianni started to battle his way back through the field, but an uncharacteristic mistake saw him spin into the gravel trap, beaching the car. For the second race, there would be no points, although there would be some consolation from the five points gained for pole position. Gleason again finished fifth.

The result of this disappointing weekend is that Morbidelli now slips to fourth in the championship and 39 points behind new leader Pepe Oriola. Kevin Gleason maintains his position following a consistent points haul in Austria.

There is now an extended summer break before the series travels east to Singapore in September for the next round.