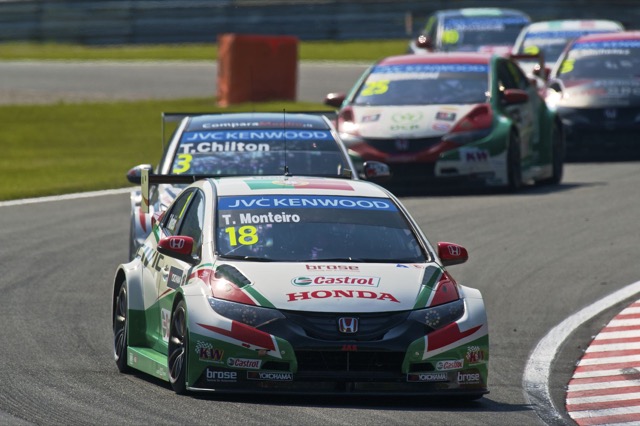 Tiago Monteiro controls 5th and aims for podium in Race 2

Tiago Monteiro fired his Honda Civic WTCC off the line at the start of Race 1 to snatch fifth place at the first corner and the Portuguese worked hard for the whole 15 laps to hold his position to the chequered flag against the tough challenge from Tom Chilton. Tiago led a high-speed six-car train that included the second Castrol Honda Racing Civic of Gabriele Tarquini who finished 8th just behind the Proteam Racing Honda of Mehdi Bennani and just ahead of Norbert Michelisz in the Zengo" Motorsport car.

With Gabriele Tarquini on pole position for Race 2 here at the Salzburgring and with the three other Civics completing the first and second rows of the grid, ambitions are high for a podium result.

“As usual it is important to make a fast start to attack from the first moment,” said Tiago. “I felt the Civic was very precise to drive, we have found a very good set-up now for the races. I had a little understeer from the middle of the race but it was under control. I’m looking forward to Race 2.”

Gabriele experienced a vibration towards the end of the 15 lap race. “I think that one of the balance weights has come off the front wheels and this was causing a vibration but nothing too serious for me. I have to make a fast start for Race 2 and then try and keep ahead of all of the Civics and the other drivers.”

Norbert Michelisz found the high-speed procession quite difficult: “The balance for me was not as good as we had in qualifying with understeer so I may change the tyre strategy for Race 2.”

“That was very interesting for us to see the performance of the Civics against the competition. Once ahead we were able to control the track position quite well. It is definitely possible to target a podium result for Race 2,” said Alessandro Mariani, Managing Director of J.A.S.Motorsport.