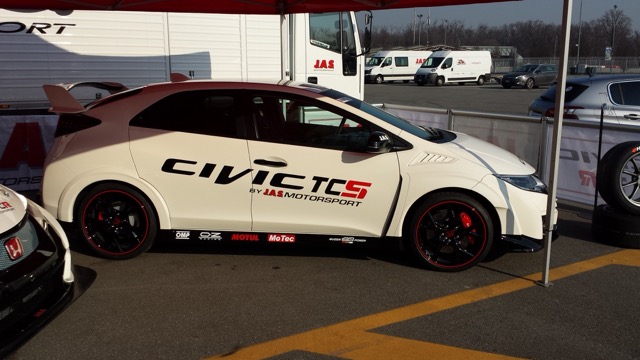 The first JAS Civic TCS car will be ready at the end of February for the first test on the track, and JAS is pleased to announce the deal with “Scuderia Giudici” who will manage two cars in 2016, starting from the first race of the Italian Championship in Monza.

When the latest version of the Civic Type R road car was launched, Honda advertising informed all Honda enthusiast fans saying: Born to race! When the first Type R arrived in the JAS workshop, the Italian company understood why!

Mads Fischer, JAS Motorsport TCR-TCS project leader says, “JAS has the right car in the Civic, and our customers are ready to race.  And we are delighted to have made a deal to supply two of our Civic TCS to Scuderia Giudici. We both are sharing the same vision to offer the opportunity to youngsters to race in an “entry-level” category to show their performance to the Touring Car Racing world! We are also happy to welcome Claudio Giudici behind the wheel of the Civic TCS! His young age fits our common views. We are thinking to promote this program in the near future, building more cars, offering an opportunity to many young drivers at the beginning of the career to showcase their performance driving a touring car and so to be able to possibly step up in the future to TCR!”

Gianni Giudici, Scuderia Giudici founder and Team Principal says, “After many years behind the wheel of every kind of racing car, I decided to offer my long experience and my passion to the youngsters. The new entry-level TCS category meets my project and I’m happy to be part of the JAS TCS program.  It’s a great opportunity for my young son Claudio to show his capability and to grow in motorsport that has been part of my life for long time!  We are talking with several young drivers for the second seat, and after our selection process, we will make the announcement.