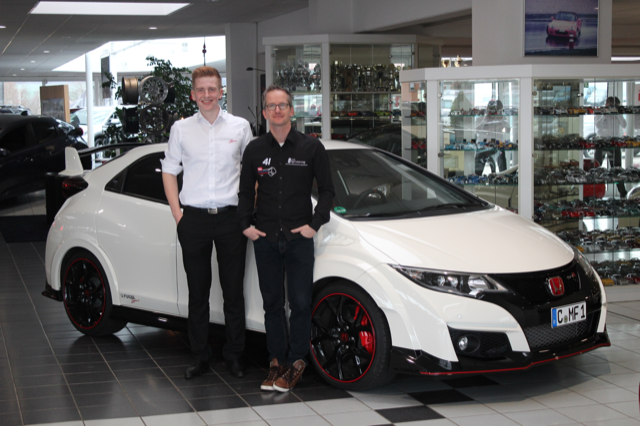 Kirsch and Fugel to Drive

The first two JAS-built Honda Civic TCR cars destined for the new for 2016 TCR Germany series have been ordered by Fugel Sport for the seven round ADAC organised championship. The JAS Civic TCRs will be operated from the family run Honda dealership in Chemnitz-Mittelbach  and driven by experienced touring car racer Steve Kirsch and 18 year old Dominik Fugel.

The new TCR Germany series will run as part of the popular ADAC GT Masters events package which will visit the Nurburgring, Oschersleben, Hockenheim and Sachsenring in Germany and also the Red Bull Ring in Austria and Zandvoort in Holland.

The Fugel Sport team has raced Honda products for many years. From 2006 to 2008 Steve Kirsch and team owner Markus Fugel successfully ran a Honda S2000 in the popular VLN Endurance Championship and recently Dominik Fugel has driven a Civic in the Endurance races on the Nordsleife.

“JAS is receiving many enquiries for TCR Civics from around the globe,” reports Mads Fischer, JAS Customer Racing Manager. “We have production running strongly already and plan to build at least 20 Civics in time for the start of the various national TCR series and the second year of the TCR International series. Technically the JAS Civic is the standard for TCR racing and the purchase cost is the most competitive of any make on the market. The Fugel Sport cars will be ready to test by March so they will be well established for the start of the ADAC series.”