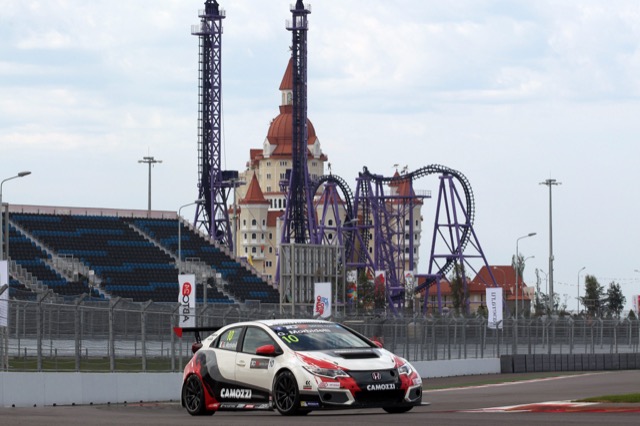 Gleason on Pole for Race Two

Technical infringements were the order of the day as the TCR International Series protagonists tackled the modern Sochi track in Russia. Many practice and qualifying times were disallowed, as drivers struggled to define the limits of the racetrack. However, for Gianni Morbidelli, some niggling understeer issues affected his preparation for the two races on Sunday, even though they were not enough to stop him setting second and third fastest times in practice.

For this weekend, Morbidelli and his teammate Kevin Gleason were forced to carry the most performance ballast at Sochi, due to their previous dominant performances in the TCR series. It’s partly a testament to the ability of the JAS Motorsport – prepared Honda Civic TCRs that Gianni was able to perform so well in the free practice sessions.

Qualifying was shortened to just one, 20 minute sprint for this event. Morbidelli once again set a blistering pace but despite being only 6/10ths off a second away from pole position he finds himself on the fourth row of the grid. He will start the first race alongside his archrival for the championship title Stefan Comini.

The West Coast Racing team welcomed a new member for this race, the Russian touring car driver Ildar Rakhmatullin. He will stand in for regular Igor Skuz in the JAS-prepared machine and will start in 12th.