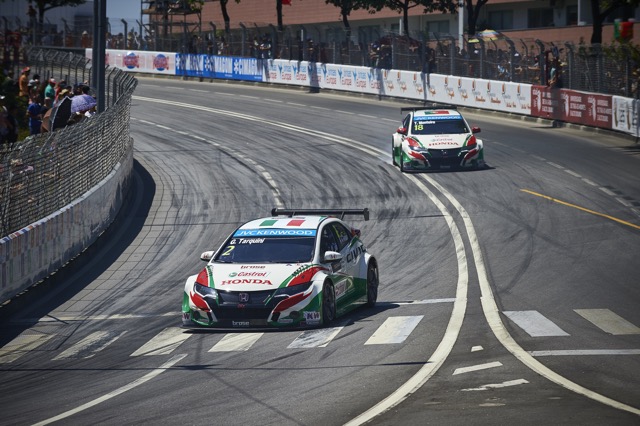 The first of today's two races from Vila Real for the FIA World Touring Car Championship took place under the scorching Portuguese sun but, whilst intense track action may have been a little sparse as the race played out, the Honda Civic WTCCs were once again sharp from the start as Michelisz, Tarquini and Monteiro quickly reacted to the slower-starting Hugo Valente ahead.

For Tarquini a little more evasive action was needed, the Italian taking to Monteiro's line to avoid delay and from there the race settled into its rhythm with Michelisz heading the Honda trio.

Jose-Maria Lopez would take race one honours, followed by Sebastien Loeb but for Honda it was a successful mission complete with three Civics maintaining a measured, consistent race to the points.
A technical problem befell Nestor Girolami, the Argentine returning to the pits after the first lap before going back out again in the latter stages for final checks and to gather more crucial data ahead of race two.

The second race will commence at 17:15 local time, with the drivers lining up 5th, 6th, 7th and 12th for Girolami, with a greater challenge ahead to avoid any mid-pack trouble and focus on potential podium positions.

Gabriele Tarquini (4th): "The car was good. I had a bit of a moment in the start because Valente was very slow so I had to move to Tiago's line, but after two laps I immediately realised it would be very difficult to pass Norbi. In the last 3 or 4 laps I went tried to attack a little bit to see the limits of the car, but overtaking really is very difficult, especially with the same car. Unfortunately I think with my qualifying position I missed out on the podium today. I'm not making any changes to the car for the second race, I'm happy with the balance."

Tiago Monteiro (5th): "It's a very demanding track; fun but really hard on the car and driver. I have heard so many stories about this place but now I understand why everyone is so excited by it. The start was crucial. I got a good one but it's very narrow so I had to avoid trouble. I quickly got into a rhythm and then started thinking about my tyres, monitoring the brakes and the tough kerbs. It's so difficult to overtake so I am happy with points. We will make some changes to the car for race two to finetune having learnt a lot from this first race."

Norbert Michelisz (4th/7th): "Of course I am quite happy. From the first moment I fell in love with this circuit. Not just for the layout but the atmosphere. After qualifying I knew there was a chance to get a podium finish so the key moment was of course the start. I focussed a lot, had a good start and managed to get by Valente. I saw Tiago and Gabriele also got good starts so I worked hard to focus and not make any mistakes."

Alessandro Mariani, Managing Director JAS Motorsport: "I am very pleased to have three cars in the top 5. We had very good race pace - and if we had better grid positions we may have been higher but it's good to see Norbi on the podium, he drove a good race. For the second race we'll have to see what happens, but we're ready to take opportunities and focus on strong results."

Daisuke Horiuchi, Large Project Leader for WTCC Development at Honda R&D: "You can see our race pace is very good. We made just a small adjustment after qualifying. The three Civics showed very equal pace in the race but this first race also shows how important a good qualifying grid position is especially on this type of fast but very tight circuit. I am very pleased for Norbi to be on the podium again. Now I hope we can overtake the front row at the start of the second race and try for another podium again."