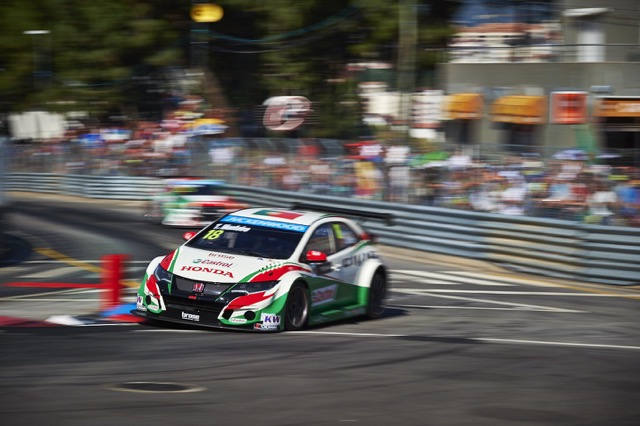 The second of today's FIA WTCC races was off to a heart-breaking start for the Castrol Honda World Touring Car Team as Monteiro's hopes for a home podium ended in retirement off the line.

In an extremely tense moment, Monteiro made the better start as Jaap Van Lagen ahead struggled to get off the line but with nowhere to go and the grid funnelling into the tight first corner, Monteiro was squeezed between the Lada team-mates as Catsburg closed the trio into an impossible three abreast formation.

It was a move that tragically ended Monteiro's race before it had even begun as the Civic was rammed into the barrier – the result of heavy wheel-to-wheel contact.
In the sister Civic Tarquini managed to navigate around the troubled scenes ahead, running in 4th with Michelisz behind in 5th as the safety car lead the field until the sixth lap.

By the eleventh lap Tarquini would set the highlight for Honda in the race, a wily Italian keen to attack in a move that paid off well against Catsburg, sealing third position and his targeted podium finish. Seizing the chance, Michelisz followed suit but not first without some contact from Catsburg, which thankfully did little to deter the Hungarian ace's progress.

The chaotic race came to a premature end under red flags but Tarquini's safe return to the podium with further points for both Michelisz and Nestor Girolami was key reward for the team, in addition to Monteiro's well being post-race.

Gabriele Tarquini (3rd): "It was a shame my weekend started the wrong way because of my problem in qualifying. But my car was very good across both races, probably the best all season. I was pushing hard and was lucky on the second start because of the big crash with Tiago and Van Lagen - I was following his [Monteiro's] line but because of that incident there was suddenly room for me to go through. I had the pace to attack Catsburg at the restart so went for third. I was really attacking – left, right, outside, inside and eventually got it."

Norbert Michelisz (4th): "It was quite eventful for me. I made a similar start to Tiago and Gabriele but then it was difficult for me to judge where to choose my line after the incident ahead and wanting to avoid getting involved. From then I knew it would be difficult for cars behind to pass so I tried to do a clever race to not overstress my front tyres too much. I had an 'on edge' moment with Nicky when trying to overtake. I was very close to the wall on the inside and I think at one point we were three cars side by side but I just felt I had the inside line. I did feel a hit on my right rear but fortunately I held the car and from there I just knew that I had to be clever and not make any mistakes."

Tiago Monteiro (DNF): "I'm ok, bit of a headache and my foot got stuck between the pedals but otherwise I am fine. I got a very good start, perhaps that was the problem, but I went for the gap between the two Ladas because they were slower off the line. Unfortunately they then started to move across in the same direction but it's one of those things - it's a street track with not much room. I was too deep in to back off but I thought maybe it would just be a little touch; unfortunately it was harder than that and we had wheel-to-wheel contact which broke my right wheel and that was it."

Alessandro Mariani, Managing Director JAS Motorsport: "I'm happy for Gabriele but of course sad for Tiago. Again we showed the great race pace that we have had throughout. It's been a difficult weekend on a difficult track but good performances from the team."

Daisuke Horiuchi, Large Project Leader for WTCC Development at Honda R&D: "Very sorry for Tiago but that is racing unfortunately. The cars were in excellent condition at the start and I was hopeful of a three-car result. Tiago got his usual fast start whilst Van Lagen was slow so he had to go left and go for the gap. Nestor showed very good pace in the second race and has again scored points."