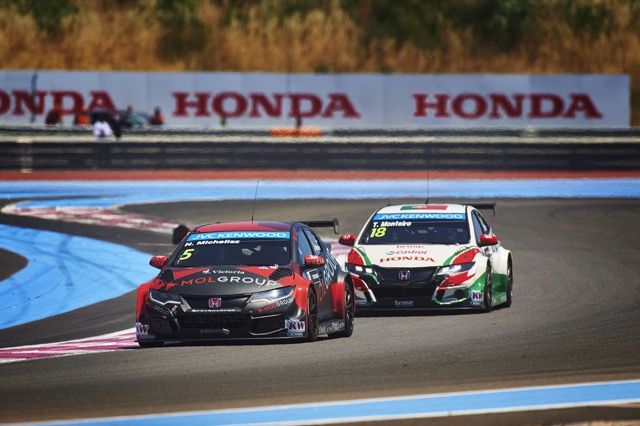 WTCC: Michelisz Makes it a Podium Finale for JAS-prepared Honda at Paul Ricard

Off the line in the opening race Tiago Monteiro and Norbert Michelisz commenced battle, both against each other and those around as the two vied for position with Hugo Valente, whilst looking to capitalise on any first corner opportunity.

In the sister JAS Motorsport-prepared Castrol Honda Civic, Gabriele Tarquini once again showcased his faultless ability to lunge off the line, instantly progressing from his 14th grid position to an impressive 10th place on the opening lap – but the Italian was far from settled. An assured and perfectly executed late-brake manoeuvre from Tarquini secured 8th position from Jaap Van Lagen.

Meantime Monteiro’s consistent pressure on Valente paid off; the Civic WTCC emerging ahead as the Frenchman made a mistake and ran wide. Michelisz was the next target and over the ensuing laps the Hondas put on a great display of nose-to-tail racing. Hungarian ace, Michelisz just managed to keep ahead by a small margin, taking the flag in 6th with Monteiro 7th and Tarquini adding to the Honda train in 8th- further championship points a worthy reward following a resolute drive in such difficult heat.

Race two was once again eventful for all, none more so than for Monteiro who was knocked out of the race from second position. Contact with Jose Maria Lopez caused too much damage to the rear of the Civic, resulting in early retirement. It was a bitter blow for the team, as Monteiro was lapping consistently from the start and had tirelessly defended from Lopez, running a Honda 1-2 behind Michelisz before spinning out.

For Michelisz the dream result of a French victory didn’t come to fruition, but an inspired drive saw his Civic lead the race from Mehdi Bennani’s false start for much of the race.  By lap 12 Lopez had closed in on the race leader but despite clean, defensive driving from the Hungarian, Lopez would eventually make his move just two laps shy of the flag.

For Castrol Honda the story was far from over; Tarquini again the man on a mission having tirelessly worked his way through the field lap after lap to cross the line in 5th from his 14th grid slot.

It was a strong race for Rickard Rydell and his Honda Racing Team Sweden crew too – the Swede also marking an impressive rise through the field for the Honda Civic in both races, taking 11th and 10th from his 17th grid positions.

Gabriele Tarquini (8th/5th) “It was quite hard work out there. I made a good start but Catsburg stopped in front of me and I had to swerve around him and lost momentum. Then Coronel changed direction suddenly and I had to lift right off to avoid the crash. I was able to gain positions and as I passed the last Chevrolet I was very happy. I pushed for 3 or 4 laps but I couldn’t catch the next car.”

Tiago Monteiro (7th/DNF): “Overall I am happy with the weekend in terms of our progress. Our race pace was good and we have made improvements throughout the weekend. In the second race I got a good start and, whilst I knew it would be tough to keep ahead of the opposition for the full 16 laps, I was giving it everything I could. I was really enjoying the race until the incident with Lopez. My car had too much damage to continue so that was really frustrating because I had been running well with Norbi and was really hoping we’d fight to the end for a 1-2.”

Norbert Michelisz (6th/2nd): “I was disappointed with not winning when I first got out of the car because you know when you’ve been leading the race for 95% you just start to believe you will be the winner. Of course with Ma and Lopez behind me, I knew that I had to focus 100%. I was ready when I saw Lopez overtaking and in seeing the speed that he had, I knew it would be tough. I tried to defend but in turn 5 I had the inside, he had the outside. He made a good move with the cutback and from there it was lost. I couldn’t attack any more, he had the speed to make a gap. But I am satisfied overall because I think we did everything we could have. I would have needed more luck to win, but maybe next time I can get the win.”

Alessandro Mariani, Managing Director JAS Motorsport: “Overall I am happy as we have proved what I said yesterday that we have good race pace. We have put three cars in the top ten in the first race and a good podium in race two, which could have been a 1-2. Gabriele worked very hard in both races and shows his character and determination.  It has been a difficult weekend here but I am pleased with how hard the team has worked for our results.”

Daisuke Horiuchi, Large Project Leader for WTCC Development at Honda R&D: “Again we had a satisfactory race pace but it shows how important it is to get good qualifying positions. Our aim now is to work hard on improving the power output so that we can get the performance we need.”