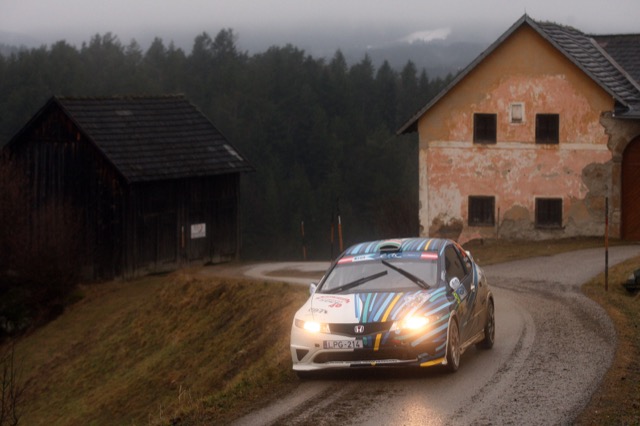 2014 has just begun, and we’re already getting started with the second edition of the FIA European Rally Championship. The calendar of the ERC 2014 is comprised of twelve exciting events on asphalt, gravel and snow. The first round will take place next weekend with the Jänner Rally, which was run for the first time in 1969!

Based in Freistadt in Upper Austria, 180 km from the capital of Vienna, more than 100.000 spectators are expected to turn out to watch the snow and ice-coated stages on the spectacular country roads of the Mühlviertel region. The Austrian classic is the first opportunity for drivers to score points in the ERC Ice Masters, and also opens the Austrian and Czech national championships.

After being victorious in the 2WD Manufacturer’s Cup in the IRC in 2011, Honda went on to win the 2WD Team title in the previous season of the ERC with “Eurosol-Honda Civic Type R” – and above all, Zoltan Bessenyey and Yulianna Nyirfas were victorious in the 2WD title for both drivers and the co-driver in 2013 .

It was at this exact Austrian opening race , twelve months ago,  that the white blue Civic Type R crew laid the base for their later success in 2WD by obtaining a third place.

“It was our first experience with snow and ice,” remembers Zoltan. “2013 was my first season with the Eurosol Civic Type R , and at the same time I was discovering the different rallies in the ERC. We played it smart, and with that experience which means that we know the inns and outs of the Rally and our car, we’re better prepared than ever. During the past year I’ve been considered a rookie but, these days, everyone wants to compete with the champion! I expect tough competition this year from Czech Jan Cerny, who will come out after the Jänner in 2WD, and Austrian Raffael Sulzinger, who was leading for a long time last year in 2WD. As for the rest – we’ll have to wait for completion of the first stages to find out who our other competitors will be!”

To prepare for the wintery start of the ERC, Zoltan spent the past few weeks practicing on the Norwegian ice stages, to acclimatise himself to driving on ice and snow.

“The weather forecast doesn’t predict any snow for the Jänner Rally but, in case it does snow, you won’t hear me complain. I’ve been driving some 440 kilometres in Norway and tried out the different type of spikes tyres, so I’m feeling confident. Let it snow!”

Cost-cutting measures in the ERC 2WD Championship mean that the competitors will be able to use a maximum of 16 tyres, plus four for shakedown.

“For this reason, I started as 0-car last weekend in Hungary in the Silvester Rally and I’ve been driving in similar circumstances to those awaiting us in Austria – in fog, in rain, and at night – so I’ve been able to test all sorts of tyres. We know that we’re prepared for what will come.”

The crew of the Eurosol Civic Type R is determined to defend the 2WD title. After the Jänner Rally, they will start in the first half of the ERC season in with Sibiu in Romania, Acropolis, or Ireland and Açores.

“Depending of the result in the Jänner, we may race in the Rally Liepaja in Latvia,” Zoltan said about the 2nd round of the ERC. “This would allow us to score extra points for the ERC Ice Masters. Our first assignment is to make the podium in Jänner and, to achieve that, we can’t make any mistakes.”

In addition to the Hungarian pair, German Armin Holz will drive at the wheel of a second Civic Type R. 53-year-old Holz and co-driver Sebastien Geipel won last year in the Class 8 Jänner Rally, and they’ve been a fixed appearance in the German-Austrian rallies for many years.

The rally starts in Freistadt on Saturday January 4th with a total of 10 special stages, totalling 138,40 km. The competition continues on Sunday January 5th with 8 special tarmac stages, covering a further 245,60 km. The winner will appear at the finish in the Freistadt Messehalle around 17h28.