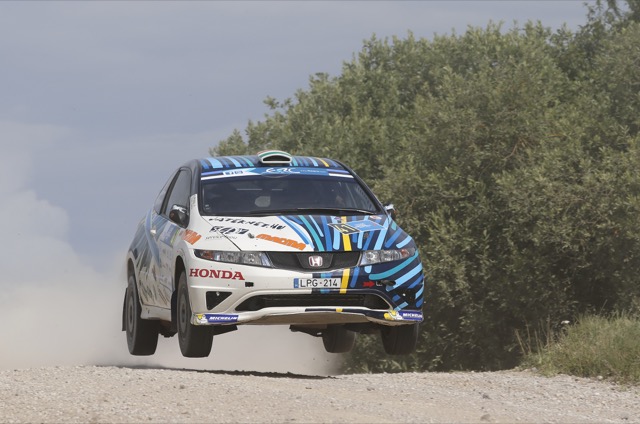 After fourteen grueling stages in the summer heat, Zoltan Bessenyey completed his debut at the Rally Estonia in style with a podium finish. The Hungarian took 3rd place in the 2WD category and the result now means Bessenyey and co-driver Yulianna Nyirfas sit atop the standings for the 2014 ERC 2WD Driver and Co-Driver Championships!

“It’s a great result and an amazing end to a very special weekend,” said the Eurosol-Civic Type R driver, full of smiles. “Considering the amount of local drivers we were up against, who know these stages so well, I’d never have thought we’d be able to clinch third… no chance. Our target was always a place in the Top 6.”

“Our strategy remained the same throughout the two days and that was to just make it to the finish and score points. Taking risks was unthinkable, especially on the fast gravel stages where jumps are taken at 170 km/hour and errors get punished harshly. And we saw that happen during the last passage in the 28 km long stage of Vaabina, where a lot of drivers had to quit. So thankfully our cautious strategy paid off.”

Bessenyey and Niyrfas ended the first day of competition with a 7th place in 2WD, providing the Eurosol Civic Type R driver with one bonus point.

“I have to admit that I wasn’t driving particularly well on the first day. The cars ahead were throwing up a lot of dust, making it difficult to see, but Yulianna was excellent and helped me pass through those tough moments. The crew of Eurosol Racing and J.A.S. Motorsport were awesome this weekend too: we couldn’t have done it without them.”

On Day 2 the Hungarian went on to secure a further five bonus points, plus another fifteen for the final 3rd place position. The total haul means Bessenyey climbs to the top of the Drivers’ Championship with a total of 73 points (ahead of Czech Jan Cerny on 68 and Frenchman Stéphane Lefebvre on 65). Zoltan now heads into the next round of the ERC in Czech Republic – the Barum Rally Zlin - as Championship leader.

“It won’t be easy, but the points gained this weekend certainly provides me with an edge for the next rally that I didn’t have before.  It’s Cerny’s home rally, so there will be a lot of support and he knows the stages very well, but it’s nice to think that I’ll be going there as the driver to beat. Yes, we’re definitely going for the 2WD title now!”

Unfortunately it wasn’t such a joyous weekend for Australian pair Eli Evans and co-driver Glen Weston, who were making their European Rally Championship debut in Estonia. At the wheel of the J.A.S. Motorsport backed Civic Type R they started well in the first stages setting two fastest times. But following a series of setbacks, this early joy quickly turned to frustration.

“It wasn’t an easy weekend, “said Eli. “The stages here are very fast, a lot faster than the ones I’m used to in Australia. And on Day 1 I was simply driving too fast and ended up slipping off the road twice.”

The damage to the underside of the car wasn’t extensive, but none-the-less required a considerable amount of repair time to fix. This delay resulted in a penalty for the Australians and they ended Day 1 in 6th position.

During Day 2, Evens-Weston fought back fiercely and climbed up to an impressive 3rd place. But that was until the short 13 km Rimmi stage arrived …

“I wanted to take 2nd and put everything into it. Unfortunately, after the jump everything went wrong. The car smacked against the ground and the radiator got hit badly. It was over and out.

“It was such a big shame, especially because the guys pulled out all the stops to patch up the car and make it drivable again. I took a risk and I lost.”

Parallel with the ERC round, the six stages of Day 2 counted for the Estonian Rally Championship. Estonian Mait Madik and co-driver Toomas Tauk participated in both rallies, and after taking a stunning 5th place in the last stage of the ERC, the local Civic Type R driver ended up in 8th place in the 2WD category.

“The fact that the Estonia Rally also counts for the ERC meant it was a perfect opportunity for us to take on the challenge of a two day long rally, because Estonian rounds don’t last that long. That’s why we entered both.”

Russian Dmitry Voronov surprised everyone by quickly positioning himself into 4th place, but by stage 5 the red Carville- Civic Type R had disappeared off the ranking lists.

“It’s a real shame as we were doing so well. But we had technical problems and despite all efforts to resolve them, we simply ended too late,” explains the 26-year-old Russian who had swapped one of the rounds of the Russian Championship with a trip to nearby Estonia.